HCMC: Not So Picture Perfect

Ho Chi Minh City has been anything but postcard perfect in recent times with construction of the city’s first Metro railway swallowing landmarks. Thankfully, the end is in sight.

If you’re still ruing the fact that you’ve had to cancel your dream trip to Ho Chi Minh City this year, look on the bright side: you’re not missing much.

The city formerly known as Saigon has been one big construction zone with scaffolding engulfing many popular landmarks from Ben Thanh Market to the Saigon Opera House and Nguyen Huê Walking Street. 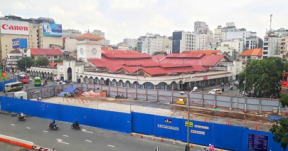 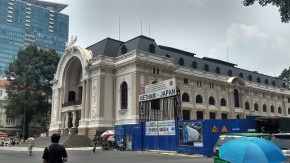 Next to Saigon Opera house

Throughout District 1, an unsightly blue hoarding has cut off major thoroughfares and isolated many popular landmarks for the past few years, as construction of the city’s first Metro railway drags on.

Perhaps most noticeable is construction work outside Ben Thanh Market, where a statue of General Tran Nguyen Han and his horse stood in the middle of a roundabout since the 1960s.

Built by the South Vietnam Army during the Vietnam War, the statue has long been a magnet for selfie-taking tourists.

It commemorates General Nguyen Han who helped Emperor Le Loi in his insurrection against China’s Ming Dynasty occupiers in the 14th century.

Statue of General Tran Nguyen Han has been removed from outside Ben Thanh Market. 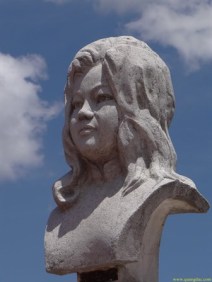 The roundabout is gone as construction of the Ben Thanh-Suoi Tien Metro Line progresses..

But with the roundabout now demolished (above) to make way for the new Ben Thanh-Suoi Tien Metro Line, General Tran and his horse have galloped off to a new home at Phu Lam Park in District 6.

The bust of Quach Thi Trang (above) – a student killed in a 1963 protest against the regime of Ngo Dinh Diem – has also been removed, and can now be found at Ly Tu Trong Park in District 1.

Another eye-sore has been the blue hoarding outside the historic Saigon Opera House (above), engulfing Lam Sơn Park. Centuries-old trees alongside the Opera House were also cut down to make way for construction.

But while the world’s been in lockdown in recent weeks, major progress has been made on returning the streets to the people, starting at the Saigon Opera House. 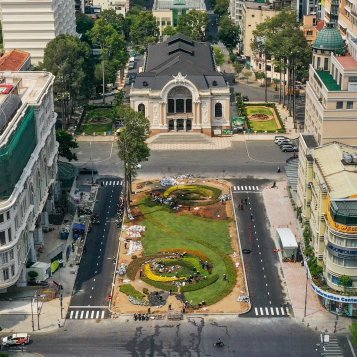 As the image from the Saigon Viewers Facebook page shows (above), scaffolding came down near the Opera House last week, revealing Lam Sơn Park, which had been hidden behind hoardings for the past few years.

To the right of the park is the entrance to the new Opera House Metro Station – the first completed Metro station in the city.

While the city was in lockdown last month, around 400 workers raced the clock to finish the B1 floor as scheduled by the end of April. It includes a lobby, ticket vending machines, automatic ticket gates and bathrooms.

Metro construction is now in overdrive, with 72 per cent of the work completed and around 85 per cent of work expected to be finished by year’s end.

The Ben Thanh-Suoi Tien Line will cover 19.7 km and include 14 stations, three of them underground.

Opening in late 2021, it will connect the city centre (including major tourists attractions like the Ben Thanh Market and Opera House) with north-eastern districts near Suoi Tien.

A second 18.3 km line will eventually run from Thu Thiem, via Ben Thanh Market and the Tan Binh district, to Nga tu An Suong.

The first blue and grey aluminium alloy carriages (pictured) will be delivered in coming months, with Japan’s Hitachi now carrying out final tests.

Each carriage will be 19.5 metres long and able to travel at up to 110 km an hour on elevated stretches and 80 km an hour underground.

Once operational, the Metro is expected to be a major boon for locals and tourists alike, helping to ease the traffic congestion in a city that is home to 7.6 million motorbikes and 700,000 cars.

Hanoi, the Vietnamese capital, is also forging ahead with its own desperately needed Metro project that promises to transform the city when it opens next year.