Singapore: Gardens By The Bay Comes Up Roses

Gardens By The Bay is now Singapore’s biggest tourist attraction, with more than 50 million people visiting since it opened in 2012.

If you’ve ever seen the electrical light parade at Disneyland, you’ll have a sense for what’s in store when you visit Singapore’s futuristic nature park, Gardens By The Bay.

Twice a night, 12 of the 18 vertical gardens in the Supertree Grove come alive in a dazzling 15-minute neon light display set to music, called Garden Rhapsody.

Throw in the thousands of starry-eyed spectators spread out on the lawns and occupying every available slab of concrete, and this could well be Main Street USA.

Built in 2012 on 250 acres of reclaimed land near Marina Bay Sands, Gardens By The Bay is a nature park built specifically by the Singapore government as part of its efforts to green the city state.

It is now ranked as the city’s most popular tourist attraction (with more than 50 million visitors since it opened in 2012) and is one of the most Instagram-worthy locations in Singapore.

At dusk, Gardens By The Bay takes on a Disney-like feel.

By day, you come to appreciate what an architectural, technological and natural marvel it is, consisting of 1.5 million plants and 5,000 different species.

It’s also home to the world’s largest glass greenhouse and a grove of 160-foot tall supertrees – giant man-made towers that look like something out of War of the Worlds –and linked by a dizzyingly high sky walk.

There’s also two cooled conservatories – the Flower Dome and the Cloud Forest – showcasing unusual plants from around the world.

But it’s at dusk that Gardens By The Bay really takes on a Disney-like feel, as thousands swarm the site ahead of the nightly sound and light show. Children squeal in eager anticipation and cameras start to flash as the spectacle begins.

The so-called Supertrees are more than 160 feet tall and visitors can walk between the canopies on an aerial walkway. You need to purchase a ticket at the entrance to visit the Skyway.

The Supertrees are embedded with photovoltaic cells, which collect energy – like living trees – that is used to power the light displays choreographed to music. 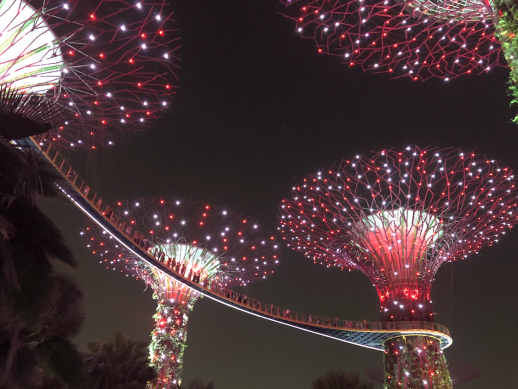 The man-made structures are also swathed, top to bottom, in extra-terrestrial-looking foliage.

Fans of Crazy Rich Asians will remember the Supertree Grove was the setting for a wedding reception in the movie. A couple of newly-weds also chose it as the backdrop for their wedding portraits when we visited. 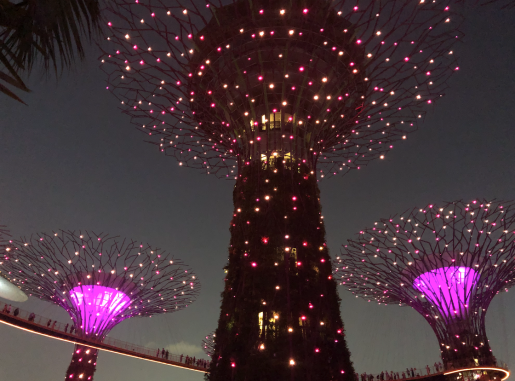 The park, which receives more than 8 million visitors each year, is part of a strategy by the government to transform Singapore from a “Garden City” to a “City in a Garden”.

The Flower Dome is said to be the largest glass greenhouse in the world and covers 1.2 hectares (3 acres). It has an evolving display of flowers and plants from both Mediterranean and semi-arid regions around the world. There are nine different gardens within the dome, showcasing plants from five continents including Australia, North America and the Mediterranean. Chilled water pipes in ground keeps the air within the conservatory cool, a welcome respite from the hot and humid Singapore weather. The Flower Dome maintains a temperature of between 23c and 25c, and slightly lower at night.

You could be forgiven for thinking you had just wandered onto the set of Jurassic Park when you enter the Cloud Forest. It’s the highest of the two conservatory domes, but it’s smaller than the Flower Dome, occupying 0.8 hectares (2.0 acres). The misty conservatory is home to the world’s tallest indoor waterfall (35m high), which spills from a man-made mountain of tropical foliage. Cloud Mountain is accessible by an elevator, and visitors can descend via a circular path where the waterfall provides refreshing cool air. Cloud Forest is also home to an excellent display of orchids and carnivorous plants – aptly named Lost World. The Secret Garden is also worth visiting as it features more than 7,000 plants found in limestone caves and forests.

There are numerous outdoor gardens to explore at Gardens By The Bay, including  World of Plants, The Canyon, the Sun Pavilion, the Heritage Garden and the Children’s Garden with outdoor water play area.

The newest outdoor attractions are the Serene Garden and Floral Fantasy.

What You Need To Know