The short of breath might wince at the seven hills that define San Francisco, but the view from the top makes the trek worthwhile.

Mention San Francisco and most people instantly think of clam chowder, earthquakes, fog, hippy culture, the Giants and the 49ers.

For me though, one thing more than any other defines the City by the Bay: its rollercoaster hills.

The notoriously steep inclines really are breath-taking – they burn the lungs and the legs – but they also provide unrivalled panoramic views of San Francisco.

It’s on these magnificent crests that you’ll also find many of the city’s great attractions, from Coit Tower and the famous parrots of Telegraph Hill, to Grace Cathedral and Lombard Street.

Shaped by the same forces that caused the city’s earthquakes – the San Andreas and Hayward faults – these copious slopes make for steep, exhausting climbs by foot.

And going back down is not much fun either, especially if you’re wearing slippery leather-soled shoes. (They are to concrete what skis are to snow.)

Because the city’s hills are so deceptively steep, the straightest distance between two points isn’t always the quickest.

Often it’s best to zig zag your way between streets – like a real life game of snakes and ladders – just to give your wobbly knees and burning calves some much-needed recovery time.

“When you get tired of walking in San Francisco, you can always lean against it.” – Unknown

San Francisco boasts more hills per square mile than any other major city in the world, about one every square mile. That’s a lot of hills for a city that is only 46.9 square miles in its entirety.

At the time of the city’s founding in 1776, just seven hills were officially named: Nob Hill, Russian Hill, Telegraph Hill, Rincon Hill, Twin Peaks, Mount Sutro and Mount Davidson. They are the original and arguably the best. 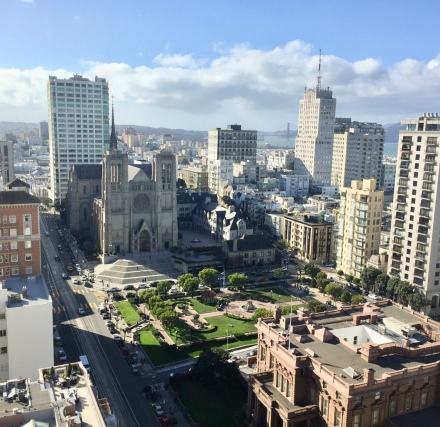 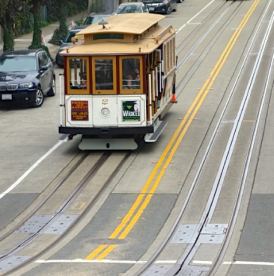 Nob Hill (often derided as Snob Hill) has long been home to San Francisco’s wealthy, from the historic mansions of mining tycoons and railroad barons to posh hotels like the Fairmont and Mark Hopkins towering over the city.

Mason St, which plunges down Nob Hill’s south face next to the InterContinental Mark Hopkins Hotel, has a 22.2 per cent gradient.

That’s not the city’s steepest, it’s not even in the top 10, but I assure you it’s a killer of a hill to climb each day when you’re staying in the neighbourhood.

Most major hotels at Nob Hill have a courtesy town car service for guests, so be sure to take advantage if you’re staying up here.

Nob Hill’s close proximity to popular sights and destinations like Grace Cathedral (the largest Episcopal church on the west coast), North Beach with its Italian restaurants, and Chinatown, puts this area squarely in the middle of most sightseeing tours. 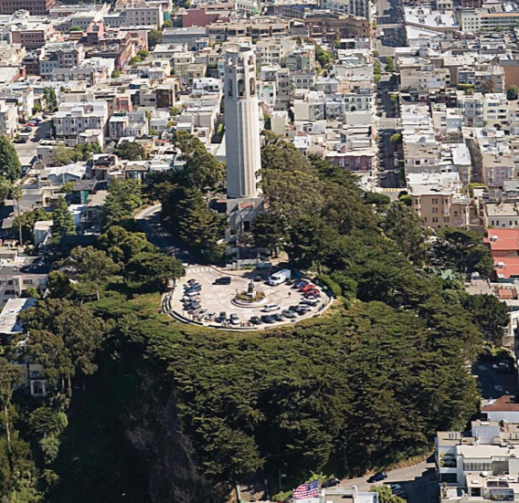 For a postcard-perfect view of the city and the Bay, make your way up Telegraph Hill via the Filbert Street steps – a peaceful, flower-strewn path with around 400 steps that wind past quirky cottages.

The Filbert Steps have a beautiful public garden – Grace Marchant Garden – named after the woman responsible for cleaning up the area around the steps and planting the garden in the 1950s.

The wild parrots of Telegraph Hill are also found here, while Coit Tower is perched majestically at the top. The tower was built in 1933 in honour of the city’s heroic firefighters and is said to resemble a giant fire hose.

The view from the top is incredible, with water views stretching from the Bay Bridge to the Golden Gate Bridge.

Gold Rush settlers reportedly discovered a cemetery atop this hill with Russian names inscribed – apparently the remains of unlucky sailors from the westward seas.

These days Russian Hill is the second-most-expensive neighbourhood in San Francisco – an upscale residential community within walking distance of Fisherman’s Wharf, North Beach and the financial district. I find it’s easier to get there on the Powell-Hyde cable car (pictured).

This is also where you’ll find the famous crooked section of Lombard Street.

One of the city’s best views awaits at Vallejo and Jones Streets, where you can savour the view of Coit Tower to the east.

From here you can scan the downtown area, Fisherman’s Wharf, the Embarcadero, the Golden Gate Bridge, the Bay Bridge and even as far as Oakland, across the Bay.

Long before Nob Hill was home to the city’s elite, Rincon Hill was the place to be seen. After the Gold Rush, Rincon Hill was a prestigious neighbourhood until it was destroyed in the 1906 earthquake and fire.

When the Bay Bridge opened in 1936, much of the land was swallowed and streets were closed to make way for the new bridge.

Today, the western end of the Bay Bridge rests atop what little is left of this once-exclusive neighbourhood.

The area is undergoing a major revival with the new Transbay Transit Center opening there, tech giants like Apple and Google opening offices in the area and luxury high rise towers being built.

But it’s all happening under a new name with the neighbourhood being rebranded as the East Cut. It’ll always be Rincon Hill to me.

It’s also considered the geographic heart of San Francisco and provides stunning views of the downtown area and the Bay.

Known widely as the hill with the cross on top, Mount Davidson is also a place of reflection and remembrance for many people. A concrete cross that stands 103 feet (31m) high memorialises the victims of the 1915 Armenian genocide.

Portable lighting illuminates the cross at Easter, and hundreds continue to climb the mountain in the early morning hours to catch Easter sunrise on Mount Davidson.

Second to Mount Davidson only in height, Twin Peaks is made up of two hills that rise almost 1,000 feet (300 metres) above the city.

The area famous for its two peaks was once called Los Pechos de la Chola, or Breasts of the Maiden, by Spanish settlers.

From the viewing area, you can see many of San Francisco’s landmarks: the Golden Gate Bridge, the Bay Bridge, Alcatraz, the Transamerica Building and the newest and tallest building in San Francisco, the Salesforce Tower.

There’s also a priceless view straight down Market Street towards the Ferry Building from up here.

Twin Peaks provides a fog barrier between the northern and southern parts of the city. You can see the fog spilling over them into the downtown most evenings.

Mount Sutro is on the western side of the city and is popular with hikers and bush walkers.

It’s also popular on a foggy summer day when the clouds often hang so low they engulf the forest.

Mount Sutro rises to 908 feet (276 metres), right next to the more famous Twin Peaks, and directly behind the campus of the University of California, San Francisco.

Originally called Mount Parnassus, it was renamed after former mayor, German-born engineer Adolph Sutro, who often planted trees on the grassy hilltop in celebration of Arbor Day. The hilltop is now a 61-acre public reserve and is home to a thick forest of eucalyptus, cypress and pine trees. 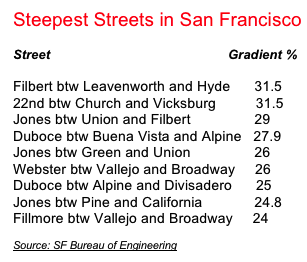