Philadelphia’s sprawling Reading Terminal Market has been voted the best farmers market in the United States.

It is one of America’s oldest and largest public markets: an international food hall with a decidedly Philadelphian flair that is loved by locals and visitors alike.

It is also the most-visited site in Philadelphia with more than seven million people dropping by each year, outstripping even the Liberty Bell.

Now, the 126-year-old Reading Terminal Market, just a few blocks from Philadelphia’s City Hall, is well and truly on the map after being crowned America’s best.

Reading Terminal Market topped a search for the five best markets in the United States by Online Farmers Market’s  – beating contenders from Cleveland, Los Angeles, Milwaukee and Florida. The judges said it stood out for its longevity and appeal to tourists and locals.

Taking up an entire block in Philadelphia’s historic city centre, Reading Terminal Market is home to more than 80 vendors peddling everything from the famous Philly Cheesesteak to Louisiana po’ boys, and even peking duck.

Within its half a kilometre footprint you’ll find a diet-busting collection of pastries, doughnuts, dumplings, burgers, pizza, ice cream and cajun soul food, all with a very distinct Philadelphia vibe.

Of course, it wouldn’t be a farmers market without fresh fruit and vegetables, seafood, meat, cheese, dips and breads, and here it’s all laid out in an easy grid system that mimics Philadelphia’s orderly street network.

For me, one of the big appeals of the Reading Terminal Market is the traditional Pennsylvania Dutch fare that’s on offer.

For almost 40 years, the market has been home to a thriving community of Amish merchants from the rolling hills of Lancaster County, just outside Philadelphia.

They’re a big hit with their indulgent delicacies like soft pretzels, molasses-rich shoo-fly pie, doughnuts, beef jerky, turkey and roast beef sandwiches and scrapple (a porky loaf  supposedly made with everything but the oink).

The market is a downtown destination for all things edible so it’s often busiest on weekends and at lunch, when hordes of hungry city workers converge for a feed.

Try to get there right when the heavy doors swing open at 8 am, or else late afternoon, when a lot of produce is often marked down.

When we visited in February last year, the market was the first port of call after arriving on the early morning Amtrak Northeast Regional service from New York City. (It was also the final port of call before we left that night, we loved it that much.)

We spent a good hour wandering up and down each aisle and getting the lay of the land before settling on somewhere for a filling breakfast.

Reading Terminal Market really is the heart of Philadelphia’s food scene – a wonderful collision of neon and noise, and of cultures and cuisine.

There’s no doubt Philly food favourites like the hoagie and cheesesteak still reign supreme here, but the culinary options are many and varied, reflecting the many immigrants who have settled in Philadelphia.

You’ll find Italian, Thai, Chinese, Mexican, Middle Eastern and more all under the one roof, in a fast-casual dining scene that reflects the needs and wants of time-poor millennials.

A Taste of Spain – a Spanish grocer specialising in imported gourmet products from the Mediterranean – is the newest arrival, taking over the space previously occupied by the German deli Wursthaus Schmitz.

As you wander around, check out the Valley Thunder grilled cheese at Meltkraft; the roast pork hoagie smothered in BBQ sauce and served with provolone cheese at Tommy Dinic’s; the crispy, crunchy fried chicken at Keven Parker’s Soul Food Cafe; or the highly-acclaimed cannoli at Termini Bros.

If I lived here, I’d make a bee line for the meat counter at Martin’s Quality Meats and Sausages. The produce looked outstanding.

Here’s a few of our other favourite food vendors at Reading Terminal Market. You can even use this interactive map to find your way around.

They say Beck’s Cajun Cafe is the home of cajun and creole food in Philadelphia and after one taste of its artery-clogging Train Wreck sandwich (pictured) you’ll know why.

Chef Bill Beck opened his Big Easy-themed stand in Reading Terminal Market in 2009 and he quickly made a name for himself with his Train Wreck cheesesteak (it won Best of Philly in 2011), his gumbo, his authentic New Orleans muffulettas and his alligator sausage po’ boy (pictured).

The Train Wreck is a Philadelphia take on the traditional Louisiana po’ boy, with thinly sliced Andouille sausage and salami added to the traditional cheesesteak recipe. Add a few shakes of Beck’s 3 Devils Hot Sauce or cool things down with Beck’s Creole Mayo.

You’ll find this Amish-run bakery at the northwest corner of the market, serving up around 40 different types of doughnuts and other baked delicacies.

The maple bacon – a sugary maple crème injected into a sugar glazed doughnut and topped with vanilla frosting, a swirl of caramel and bacon bits – is one of its best sellers.

By George! Pizza, Pasta and Cheesesteaks

Whether you’re after a quick pizza slice, a cheesesteak or a meatball sandwich, By George! has you covered. They actually serve up one of the biggest cheesesteaks I’ve seen, including a chicken variety. 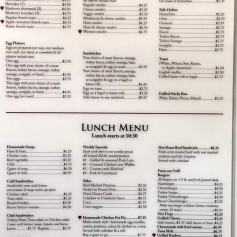 This was my choice for breakfast at Reading Terminal Market, and it didn’t disappoint. Located in the Amish corner of the market, Dutch Eating Place serves up insanely large portions of incredibly hearty food.

There’s often a line at peak times, but it moves quickly. Before you know it you’ll be sitting elbow-to-elbow at the horse-shoe shaped counter drooling over a menu that includes eggs every-which-way you can imagine, blueberry-studded pancakes, cinnamon apple French toast, griddled sticky buns and crispy slabs of scrapple.

The bottomless cups of coffee are also a good way to start the day.

Dutch Eating Place also has a great dessert menu that includes shoo-fly pie, made with molasses, and sweet cinnamon-scented apple dumplings that have to be seen to be believed.

They are actually whole, cored apples wrapped in pastry and baked, before being served steaming hot with thick cream. 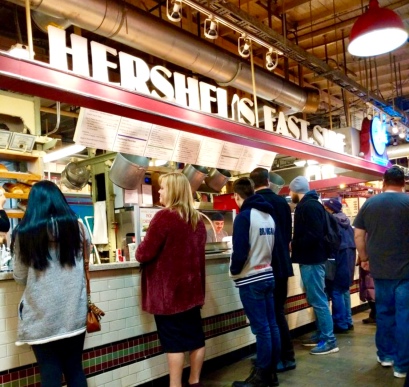 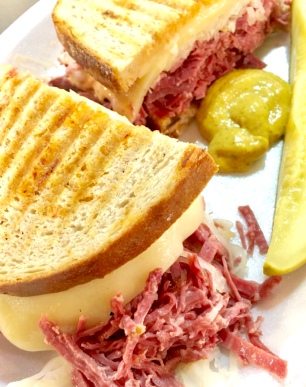 But Hershel’s East Side Deli really only does one thing: the best hot deli sandwiches you’re likely to find in this part of town. The deep queue of people ordering sandwiches stuffed with homemade corned beef, pastrami or brisket can’t be wrong.

Most get it piled on rye with sauerkraut, Swiss cheese and Russian dressing for the authentic experience.

Owner Steven Safern‘s uncle Hershel was also one of the original chefs at the famous Katz’s Deli in New York. 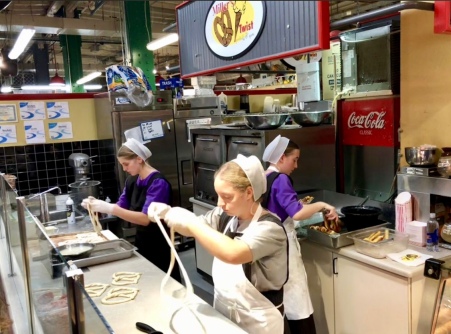 Pretzels are one of the fastest-growing snack foods in the world and after one bite of the baked twists of buttery dough from Miller’s Twist you’ll know why.

These aren’t the chewy pretzels that Philadelphia is known for. Instead they are made from fresh dough throughout the day, rolled and twisted by hand, making them more tender.

You can even have a pretzel for breakfast at Miller’s twist, with bacon, egg, and cheese, all wrapped in pretzel dough. Still hungry?

Try one of their signature pretzel-wrapped hot dogs or turkey sausage flavoured pretzel with broccoli and cheddar.

Molly Malloy’s is a large sit-down restaurant bar in the centre of Reading Terminal Market, with 24 beers on tap, many of which are local craft beers. It’s actually the only site in the market with a liquor licence, so you can imagine  it does a roaring trade at lunch and late in the afternoon.

The menu has the Irish flair that its name suggests, with dishes like Irish beef stew, chicken pot pie and fish and chips all regular favourites.

Molly Malloy’s seats 79 (at the bar as well as at tables) and there are flat-screen TVs throughout the bar. They’re popular when there’s a big football game on, especially if it involves the Philadelphia Eagles.

You can even get a beer to go while you browse the market.

If you’re a day visitors to Philly, this is a good spot to enjoy a glass of wine, a beer or a cocktail before getting the train back to New York or Washington.

What’s In A Name?

The market gets its name from the Philadelphia & Reading Railroad. In 1890, the company bought the land, already home to a string of outdoor stalls, for a new terminal.

But the market stall merchants refused to budge, prompting an agreement that eventually saw a new market created beneath the train shed and tracks at street level.

The Reading Terminal Market opened for business on February 22, 1893.

The railroad is long since gone but the market and the historic Italian Renaissance style building live on, despite some rocky times in the late 1970s that nearly sank it. Efforts to revitalise the site began in the early 1990s, making it the jewel that it is today.

Bordered by 12th Street, Arch Street, 11th Street and Filbert Street, the building is a significant landmark in Philadelphia. It was even placed on the National Register of Historic Places in 1972 and was declared a National Historic Landmark in 1976.